After the completion of the New Palace in 1769, Frederick the Great had the Belvedere on Klausberg erected as part of a beautification plan for Sanssouci Park. It was the king's last architectural enterprise at Sanssouci. As the first Belvedere in Potsdam, the building founded a tradition of architecturally designed lookout points in the royal residential city.

In translation "Belvedere" means "beautiful view." Klausberg provides delightful views out across Sanssouci Park to the hilly landscape rich with lakes and the city of Potsdam. In keeping with Frederick the Great's wishes, the two-story rotunda, augmented with two balconies and crowned by a dome, was an attempt to reconstruct Emperor Nero's imperial palace of in Rome.

The structure gutted by fire during the final days of World War II was restored as a contribution to Germany's Reunification. The Belvedere's exterior and interior were largely repaired and restored, returning its Upper Hall, with its stucco marble, reconstructed ceiling painting in the dome and the oak parquet floor, to its former grandeur. 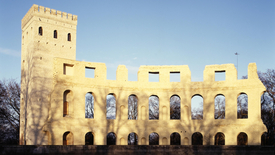 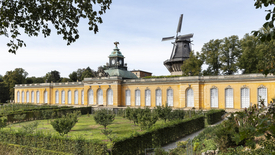