The Most Beautiful Prussian Palace from around 1700

You can get your ticket at the palace register.

Oranienburg Palace is one of the most significant Baroque buildings in the Mark Brandenburg, and a symbol of the Electorate of Brandenburg’s regal ascent.

The palace dates back to a rural mansion built as of 1651 for the Great Elector’s wife, Louise Henriette, who was born Princess of Orange-Nassau and also gave the locality of Oranienburg its name.

King Frederick I had the palace expanded and magnificently furnished in memory of his mother Louise Henriette at the end of the 17th century. By 1700, this palace was considered the most beautiful of all Prussian residences. Under Prince Augustus William of Prussia, one of Frederick the Great’s brothers, the palace and garden experienced another golden age during the middle of the 18th century.

After having undergone a variety of uses, the Oranienburg Palace Museum now houses a collection of masterful works of art, among which is the magnificent etagère, or display stand for porcelain, in the Porcelain Chamber. Also outstanding are pieces of seating furniture made of ivory, a series of tapestries (made by the manufactory of Pierre Mercier in Berlin) extolling the heroic deeds of the Great Elector, sculptures by François Dieussart, and works of art by the sculptor Bartholomeus Eggers.

The extraordinary collection of paintings includes masterpieces by the great Flemish painter Anthony van Dyck. Another splendid highlight is the Silver Vault, where select items of royal ornamental silver are on display.

Last admission 30 minutes before closing
Winter season: Can only be viewed with a guided tour.

There is an elevator in the Palace Museum. The restrooms are wheelchair accessible. Wheelchair users will need assistance to enter the palace as the counter hall is not barrier-free. 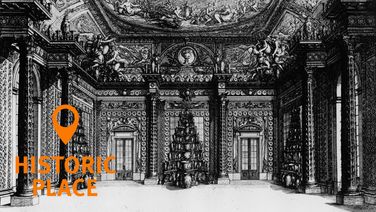 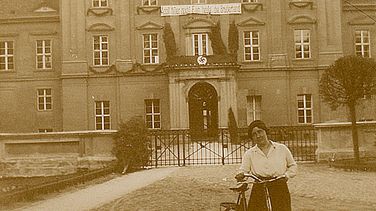 Oranienburg Palace during the Nazi Regime

Traces in the palace 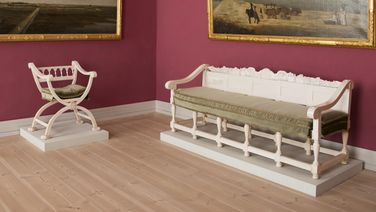 The Ivory Furniture in Oranienburg Palace