Information regarding your visit

The New Palace can currently only be visited as part of the Highlight Tour. This includes the vestibules, the festival halls and the lower princely quarter.

This palace is open.
A visit is currently only possible for individual visitors; group tours will be offered again starting 1 September 2021.

A colossal palace building, its high tambour dome recognizable from afar, rises up at the western end of the Hauptallee (the main promenade) in Sanssouci Park: the Neues Palais (New Palace).

In strong contrast to the intimate and rather modest Sanssouci Palace the large palace complex served official, representational needs. Grand banquet halls, splendid galleries and regally designed suites, not to mention Sanssouci’s Baroque palace theater in the southern wing, await visitors in its interior. Select works of 18th century art and decorative arts can be viewed at the palace in their original contexts.

The New Palace is the last royal residence Frederick the Great would have built in his park. It was a demonstration of the Prussian state’s undiminished power and wealth following the deprivations of the Seven Years’ War (1756–63).

Frederick rarely stayed here himself; instead the palace was mostly used as guest apartments and for celebrations. The recently restored Lower Royal Suite, with its Braided Room, Concert Room and Oval Cabinet, presents one of Europe’s most luxurious interior décors.

Later, William II, the last German emperor, and his family used the New Palace as their preferred place of residence.

Visits to New Palace are bound to fixed admission times. Same-day tickets are available for purchase at the Visitor’s Center at the New Palace as of 10 am.

PLEASE NOTE
The New Palace can currently only be visited as part of the Highlight Tour. This includes the vestibules, the festival halls and the lower princely quarter.

Due to restoration work, the New Palace is, unfortunately, currently not accessible to wheelchair users. 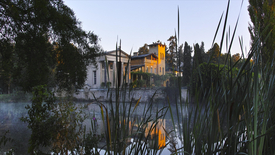 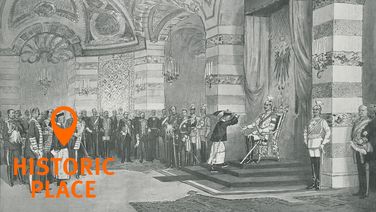 New Palace 1901 | Kowtowing before the Kaiser 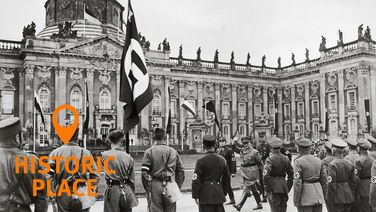 New Palace / 1933 | The Marble Gallery: A Site in the Service of National Socialist Representation 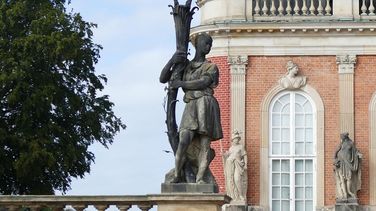 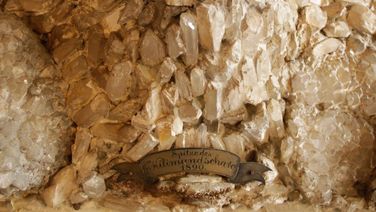 The “Tip of the Kilimanjaro” at the New Palace in Potsdam