Grunewald Hunting Lodge – that conjures up the sound of the horn and the kill of wild game. Courtly hunting in the forests and lakes surrounding the picturesque Renaissance palace situated “in the green woods” had been a tradition since 1542. An enthusiastic hunter, Joachim II Hector, Elector of Brandenburg, had a stronghold constructed for himself. Frederick I implemented representative Baroque expansions and smaller court buildings at the beginning of the 18th century. However, the palace was primarily characterized through extensive modernization work that was carried out from 1901-09 on the initiative of William II . The palace has been used as a museum building since 1932. The famous Cranach paintings from the SPSG’s collection have been on display in a permanent exhibition at Grunewald Hunting Lodge since October 2011. The second Mayn emphasis of the new permanent exhibition – on the ground floor of the building – is dedicated to the theme of “Courtly Hunting in Art.”

The gallery with portraits of rulers of the Hohenzollern dynasty from the 16th to 19th centuries on the upper floor can be visited on special guided tours.

Treasures are hidden in Grunewald Hunting Lodge: Nearly 30 works by the painter Lucas Cranach the Elder (1472–1553) and his son transport viewers back in time to the era of Martin Luther and the Reformation in Brandenburg. They display portraits of the Brandenburg sovereigns, while pointing out the virtues of a good ruler in a series of Exemplum (example) panels from the Berlin Palace. Other works enter into the worlds of ancient and biblical figures, clearly demonstrating the Passion of Christ.

Summer Season | May to October

Can be viewed with a guided tour.
For organisational reasons, there may be waiting times. We ask for your understanding.

The Rulers' Portrait Gallery on the upper floor can only be visited as part of special guided tours.

Valid for one day.

The Hunting Lodge is not suitable for wheelchairs; however, the courtyard and the Hunting Storehouse are accessible to wheelchair users with assistance. 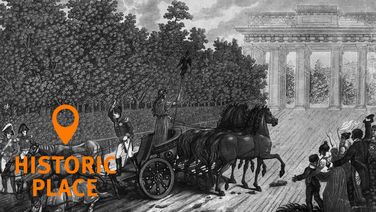