The Roman Baths are closed due to restoration work performed as part of the "Prussian Palaces and Gardens Master Plan". Thank you for your understanding.

The Romantic ensemble of the Roman Baths forms a picturesque counterpart to the severity of Charlottenhof Villa. It transports us to the estate of an Italian villa, where herms of Dionysus, Pompeiian column fragments, an ancient Centaur Sarcophagus and plots of southern vegetables and lush decorative plants awaken associations of an ideal Italy.

The crown prince, later King Frederick William IV, who was quite talented as a draftsman, delivered countless sketches laying out his ideas for this ensemble. Karl Friedrich Schinkel and Ludwig Persius turned the royal visions into reality, and as of 1829, a series of structures was erected: the Court Gardener’s House, the adjacent pavilion in the design of a Roman podium temple with a pillared portico, the Gardener’s Assistant’s House, the Large Arbor, the Arcade Hall and ultimately the Roman Baths.

However, the Roman Baths are neither intended as the imitation of Roman thermal springs, nor as an ancient villa. Instead, the crown prince had a new architectural creation erected that drew on an Italian country house in a 15th century style. Even the newly acquired knowledge about building construction in antiquity won through excavations in Herculaneum and Pompeii at the time was playfully and colorfully put into practice, in the informal series of the Atrium, Impluvium, Caldarium, Apodyterium, Viridarium and Billiard Room.

Flat, saddleback roofs, a tower, asymmetrically connected architectural components, pergolas entwined with vine leaves, a terrace with a view across a pond to Charlottenhof Palace, and the landscaped park created by Peter Joseph Lenné, all help to shape the unmistakable character of Frederick William (IV)’s retreat. Alexander von Humboldt resided here during his stays in Potsdam.

Only public parking at the Lennéstraße, Geschwister-Scholl-Straße

Augustiner im Bürgerbahnhof
next to the station "Park Sanssouci" 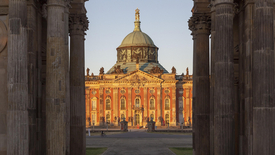 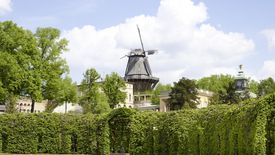 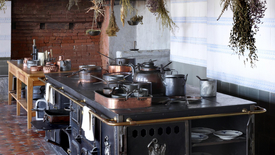 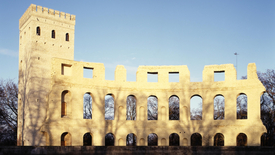 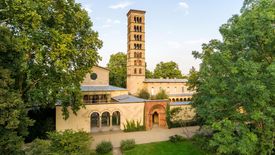 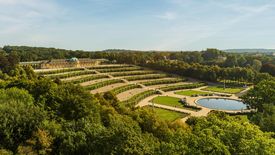 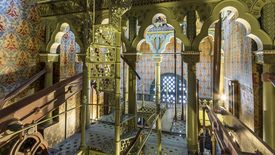