Ferry service to Peacock Island on 6 February from 2 pm

Due to short-term maintenance work, the ferry service to Peacock Island is closed on Monday, 6 February until 2 pm
We ask for your understanding!

Built on Peacock Island in 1794, this pastoral pleasure palace was commissioned by King Frederick William II for himself and his mistress Wilhelmine Encke, later Countess Lichtenau. The half-timbered construction with wooden sheathing, described as a “dilapidated Roman country house,“ resembles a ruin in a romantic setting.

The discovery of Tahiti in the southern Pacific Ocean 20 years before the palace’s construction and a description of the island by the Frenchman Louis-Antione Bougainville, published soon after its discovery and eagerly received the world over, also inspired this king with a taste for sensory pleasures. With his Otaheitisches Kabinett (Tahitian Chamber) he succeeded in incorporating the seemingly unattainable exoticism of the South Pacific to a Prussian palace. Imaginatively decorated as a bamboo hut, the tower room is painted with exotic plants and colorful peacocks, as well as palm-fringed vistas of the world outside. The rest of the palace’s magnificent Neoclassical interior, with its furniture, wallpaper, carved decorative elements and wooden floors, forms a surprising contrast. It has been almost completely preserved in its original condition and provides an authentic account of courtly living arrangements around 1800.

Later, Frederick William III and his wife Queen Luise would spend their summers here, and had real palm trees planted on the island. From 1818 Peter Joseph Lenné was commissioned to convert the island into a landscape garden. A number of other buildings were added, such as the Palm House (which burned to the ground in 1880) and the Kavalierhaus (Gentleman’s Building) designed by Schinkel. 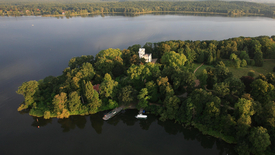 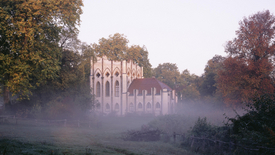