This house is open.
A visit is only possible for individual visitors; group tours are not currently offered.

You can get your ticket at the register.

A magnificent collection of 17th and 18th century coaches, sleighs and sedan chairs from the former royal stables of the Brandenburg-Prussian dynasty is exhibited in the Royal Coach House at Paretz Palace. This permanent exhibition recalls that Queen Luise and King Frederick William III traveled to Paretz with their children and a large retinue, and that the coaches and harnesses were stored in this coach house.

The Royal Coach House displays Frederick William’s children’s coach, dating from 1690 when he was electoral prince. It is the oldest of its kind in Europe. Also exhibited are stately coaches from the period of the first King in Prussia, a small coach belonging to Frederick the Great, sedans, and utility vehicles, such as a fire engine from the Kronprinzenpalais in Berlin.

The highlight of the collection is a state coach that was built in 1789 for King Frederick William II by the Strasbourg coach builders August Christian and Johann Christian Ginzrot, which made history as the Golden Coronation Coach in 1861. It is one of the vehicles that was most damaged during World War II, and has been restored since then.

Valid for Paretz Palace and the Royal Coach House.
Valid for one day. 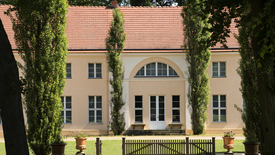