Ridolfo Schadow. The Judgement of Cupid

On the occasion of the 200th anniversary of the death of the sculptor Ridolfo Schadow (1786-1822) an idea of the artist will be realized for the first time within a presentation in the vestibule of the New Wing in Charlottenburg Palace: Three young girls sit opposite the winged God of Love, Cupid. Engrossed in their respective activities they don’t appear to have noticed his presence. Cupid is undecided, on whom should he bestow the floral wreath in his hand? This arrangement of four marble sculptures awakens associations with the story of “The Judgement of Paris" from Greek mythology. Zeus, the father of the Gods, has assigned the son of the Trojan King, Paris, the task of deciding who is the most beautiful of the goddesses Hera, Athena or Aphrodite.

However, here it is adolescent, sensitively observed people in poses capturing everyday situations: the young Cupid, the Girl with Doves (Innocence), the Girl Tying her Sandal and the Girl Spinning. King Frederick Wilhelm III of Prussia purchased the four sculptures produced by Ridolfo Schadow in Rome. Three of them stood in the Royal Palace (Kronprinzenpalais), the fourth was displayed in the Berlin Palace. Thus, with this presentation, the original intention of the sculptor, of arranging the four figures as a group, has been fulfilled for the first time.

What real circumstances could have inspired this idea of the prematurely deceased Ridolfo Schadow? Living in the Casa Buti, a type of artists’ guesthouse in Rome, the sculptor not only met fellow artists such as Bertel Thorvaldsen (1770-1844) and Antonio Canova (1757-1822), but also the three daughters of the Buti household. They were probably the models for the charming genre scenes, which were very popular at the time. The small exhibition provides info on the origin, interpretation and later influence of the figures. Visitors can find additional details of Ridolfo Schadow’s work and life in Rome on the SPSG website, as well as info on further works which were acquired by the Prussian ruling house through the mediation of his father and teacher, the famous Berlin sculptor, Johann Gottfried Schadow (1764-1850).
He will also receive considerable attention in 2022: The Alte Nationalgalerie SMB PK, the Gipsformerei SMB PK (Replica Workshop), the Schadow Gesellschaft Berlin e.V. and the Stiftung Stadtmuseum Berlin, are all honouring Johann Gottfried Schadow with their own presentations.

The Sculpture Group "The Judgement of Cupid"

Vestibule in the New Wing

Valid for a single visit to all the SPSG museum institutions in the Charlottenburg Palace Gardens incl. special exhibition on one day.

On sale at all palace registers, at the visitor centers and online. When purchasing tickets a fixed admission time for Charlottenburg Palace will be booked as well.

Valid for up to 2 adults and up to 4 children belonging to the same family aged 18 or younger. Valid for a single visit to all the SPSG museum institutions in the Charlottenburg Palace Gardens incl. special exhibition on one day. On sale at all palace registers and at the visitor centers. When purchasing tickets a fixed admission time for Charlottenburg Palace will be booked as well.

The vestibule is accessible for wheelchair users. 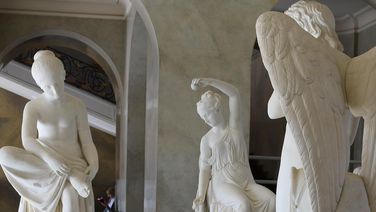 A hidden declaration of love by the sculptor Ridolfo Schadow