The New Palace in 1918: Between the Monarchy and the Weimar Republic

A hundred years ago, in November 1918, the Prussian monarchy ended with the abdication of Kaiser Wilhelm II (Emperor William II). The event marked the beginning of important decisions and new regulations concerning the ownership status between the former royal dynasty and the Prussian state. Frederick the Great’s last and largest palace building in Sanssouci Park played an important role during Germany’s November Revolution in 1918.

The Kaiser, William II (1859–1941), had a special relationship to the New Palace. He grew up there with his parents and siblings, and he was heir to the Hohenzollern throne. Consequently, after he ascended the throne in 1888, he chose this building as his most important place of residence next to the Berlin Palace. Even during World War I, the New Palace remained the preferential residence of the emperor and his wife, Augusta Victoria (1858–1921). On November 9, 1918, while William II was residing at his imperial military headquarters, the “Große Hauptquartier” in Spa, Belgium, the empress lived through the November Revolution at the New Palace in Potsdam.

This presentation is integrated in the palace’s permanent exhibition and includes 15 subsections. Excerpts from letters, transportation lists and photographs recreate the authentic atmosphere of this brief phase in which suitcases were packed, and decisions had to be made about the fates of the works of art and the reorganization of the palace. Focus on the period in which the New Palace was an imperial residence is made tangible for the first time, and its significance is commented on in context of the abrupt changes of 1918. For example, some of William II’s uniforms, on their originally preserved and labeled wardrobe hangers, are returning from Huis Doorn, his Dutch residence in exile. The monarch’s Neo-Baroque desk, as well, will once again be displayed in the emperor’s former study, a century after it was removed from the New Palace. In addition, the large “jewelry cabinet” of the empress, pieces of furniture, and a series of paintings are used to examine various aspects of the dispute over property and assets. Imperial porcelain, ration stamps for bread from the “Turnip Winter,” and a portrait of Emperor William II that was defaced in the Revolution attest to the high drama of this turning point in German history.

Included in the palace entrance 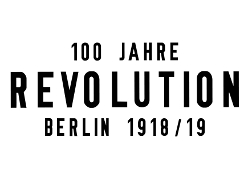