West Berlin in turmoil over a ceiling painting

The exhibition focuses on the long years of political and social conflict over the ceiling painting in the White Hall of Charlottenburg Palace following the work’s destruction in the Second World War. Ultimately, in 1972 the artist Hann Trier (1915—1999) executed a modern design of his own. Through participatory elements and a wealth of original objects, texts and historical images never previously shown, exhibition visitors are offered special insights into the time of the palace’s reconstruction.

Starting from the destruction of Berlin and the consequent need for a new order in politics and culture – and thus also in the palace – the exhibition tells the story of the debate on what was to be done about the White Hall’s lost ceiling painting. The various approaches to the conservation of historic monuments held at the time are illustrated with reference to a number of notable figures and their positions on the ceiling painting question.

During the long years of public discussion devoted to the ceiling painting, Hann Trier submitted a large number of designs and sketches. Inspired by these, visitors can get creative themselves and compose ceiling paintings of their own.

Trier’s completion of his painting in 1972 was followed by further contemporary art projects at Charlottenburg. These are presented in the exhibition in association with outstanding figures active in the West Berlin art scene at the time.

In a museum workshop, grown-ups as well as children are invited to participate in further creative activities.

The exhibition culminates in a visit to the White Hall with Trier’s imposing ceiling painting, under which designs by four artists from the 1950s and 60s are presented along with the final full-size sample paintings by Hann Trier and Karl Manninger (both 1971). 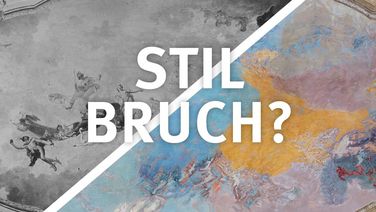