The Potsdam Conference marks one of the most important historical events of the 20th century. World-wide, it stands as a symbol of the endpoint of World War II in Europe and the outbreak of the Cold War. The “Potsdam Agreement” that was adopted at Cecilienhof Country House laid the foundation for the reshaping of the world after 1945.

The Prussian Palaces and Gardens Foundation Berlin-Brandenburg (SPSG) is showcasing a special exhibition on the occasion of the 75th anniversary of the Potsdam Conference at Cecilienhof Country House till 31 October 2021. Visitors at this actual location will be able to experience a multi-medial journey back to these fateful days in the summer of 1945. A factual, ideology-free, presentation regarding the geopolitical decisions made contrasts with the moving and emotion-filled voices of those affected. Famous historical personalities such as Churchill, Stalin, and Truman stand opposite history’s countless “nameless” – including victims of atom bombs, displaced persons, and collaborators. This special exhibition makes it possible to examine this period of world history in a multi-perspective way. For the first time, the famous garden terrace where press photos were taken of the “Big Three” sitting in wicker chairs will be added as part of the exhibition.

WE OFFER THE FOLLOWING GROUP TOURS:

Group offer only possible with previous booking.
Some parts of the exhibition are not suitable for children under 14 years of age.

On site, please follow the signs to the visitor entrance. Lockers are available.
Photography is permitted in the exhibition. The exhibition is accessible for wheelchair users.
The exhibition tour also leads outside the Cecilienhof, for example to the courtyard and the garden terrace.

It is obligatory to wear a mouth-nose cover and to keep a minimum distance of 1.5 metres.
We thank you for your understanding. 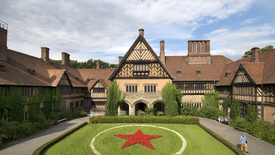