This palace is open.

No other palace is so closely linked with the personality of Frederick the Great as Sanssouci. The name Sanssouci – without a care – should be understood as both the primary wish and leitmotif of the king, because this was the place where he most preferred to retreat in the company of his dogs. The king’s summer residence was ultimately his favorite place and sanctuary in difficult times.

The location of the palace beside its well-known vineyard terraces and the originally preserved 18th century interior decoration allow visitors to delve into the world of the “philosopher of Sanssouci.” The interiors are characterized by their elegance and stylish displays of grandeur. They are also a clear expression of the king’s love of beautiful surroundings – his “Prussian Arcadia.”

It is of note that the king wished to be buried in a crypt on the uppermost terrace of the vineyard. Even in death, he wanted to be near his beloved Sanssouci. His wish was granted, although not until his reburial there in 1991. Frederick the Great’s grave is located on the highest terrace.

Visits to Sanssouci Palace are bound to fixed admission times. Same-day tickets are available at the Visitor center at the Historic Windmill from 30 minutes before the Palace opens. Because the number of admission tickets per day is limited, we recommend purchasing your tickets in advance through our online ticket shop.

Suitable for people with disabilities in accompaniment. The restroom in the visitor center Historic Windmill is suitable for wheelchairs. 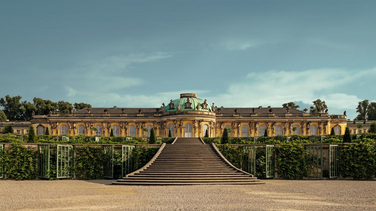