The Temple of Pomona – Pfingstberg represents the young Karl Friedrich Schinkel’s first constructed architectural design. The structure with its rigorously classical forms was commissioned as a tea pavilion in 1800 by the prior owner of the vineyard, the royal Prussian privy councilor Carl Ludwig von Oesfeld.

The pavilion, located at the time in a private vineyard garden, was named after Pomona, the Roman goddess revered for a rich fruit harvest. King Frederick William III purchased the property near the New Garden in 1817 and used the building for occasional visits by the royal family.

The Belvedere and Temple of Pomona were closed after World War II because of their proximity to Soviet military installations and fell into oblivion. Deteriorated to just a ruin, the small temple was reconstructed in 1993 with support from the Hermann Reemtsma Stiftung in Hamburg. The restoration of the Belvedere was completed 12 years later.

Today Pfingstberg with its two buildings operated by the Förderverein Pfingstberg e.V. is a popular lookout point in the middle of the Potsdam-Berlin cultural landscape and a favorite event location in Potsdam.

Current opening times on the website of the Belvedere Pfingstberg > 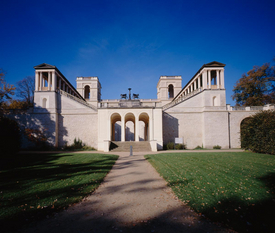 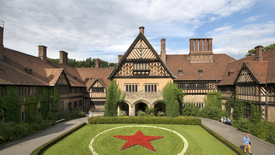