The Fascinating Court of Muses

Rheinsberg was the private retreat of the artistically inclined Crown Prince Frederick (later Frederick the Great) from 1736–40. Not only did he spend some of his happiest years here, it also served as a testing ground that would lead to masterful results at his favorite residence, Sanssouci in Potsdam. Frederick enlarged the simple Renaissance palace into a three-winged ensemble with two prominent towers, and had the main axis of the pleasure garden laid out with its characteristic garden portal as well as a long traverse axis, which he would later repeat at Sanssouci.

Four years after beginning his reign, Frederick gave the palace and garden to his brother Henry, who enlarged the estate to more than 300 hectares in the half century that followed. Henry had a grotto made of fieldstones and a hedge theater laid out, and opened up the garden on the other side of the lake, Grienericksee, with ground-level terraces, which he augmented with an obelisk and a stunning avenue, the Perspektivallee. Henry also continued to develop the palace into an innovative center for festivities, theater and music culture.

Adolph von Menzel, Theodor Fontane and the young Kurt Tucholsky later came to Rheinsberg, helping to perpetuate the legend that it hosted an inspirational court of muses. Both brothers – Frederick and Henry – left their marks on the palace garden, each employing an individual mastery to command the transformations within Rheinsberg’s garden design from the Rococo to Neoclassicism. Not only did they create an impressive mirror of the 18th century’s sweeping changes, they invite us, even now, to trace and savor the magic of this special location.

In addition to its use as a museum, various special tours, lectures and concerts take place at the palace year-round.

The Pleasure Garden at Rheinsberg is an important example of garden design. Please help us to maintain the park as a place of culture and recreation.

Year-round, daily, 8 am until dusk 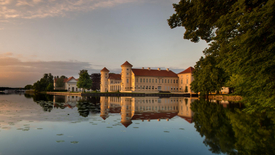