As a preventive measure to contain the Coronavirus disease (CORVID-19), the palaces as well as Peacock Island will remain temporarily closed from 13 March to 19 April 2020. No events will take place during this period.

The costs for online tickets, purchased during this period, will be refunded automatically according to the payment method used for your order. We ask you for some patience due to the high number of requests.

Queen Luise and her family would spend the summer months at Paretz Palace in the secluded idyll of the peaceful Havel River landscape. Far removed from the courtly etiquette and pomp of Berlin, the Prussian capital, they indulged in a bourgeois domesticity that, in a time of great change, would serve as a model for an entire generation.

David Gilly systematically planned and built the palace and village of Paretz from 1797–1804 to a high aesthetic standard, creating a summer residence for Crown Prince Frederick William (III) and his wife Luise. A prime example of Prussian rural architecture from around 1800, it satisfied both the desire for a royal country manor as well as the requirements of a functional farm. It also harmonizes beautifully with the Havel River’s expansive landscape.

Only 20 kilometers from Potsdam, Paretz is still one of the most delightful places to visit in Brandenburg. A tour of the royal quarters fitted with precious furniture, paintings, works of art, and the famous Paretz wallpapers provides fascinating insights into the lifestyle of Luise, who was deemed carefree and temperamental.

The palace’s permanent exhibition, which was newly conceived and installed in April 2014, depicts the fascinating architectural history of the estate and its use, and documents the restoration of Paretz Palace, which had been disfigured beyond recognition for a number of years.

The Royal Coach House has a small, but art historically important collection of valuable 17th and 18th century coaches, sleighs and sedan chairs that belonged to the Prussian dynasty.

Valid for Paretz Palace and the Royal Coach House.

The restrooms in the Hall Building are wheelchair accessible. 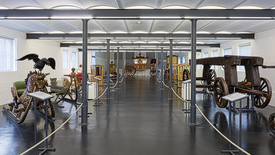 The redesign of the permanent exhibition was funded by the European Regional Development Fund.
Investing in your future!